To See the Sound, Poems by Darius Degher 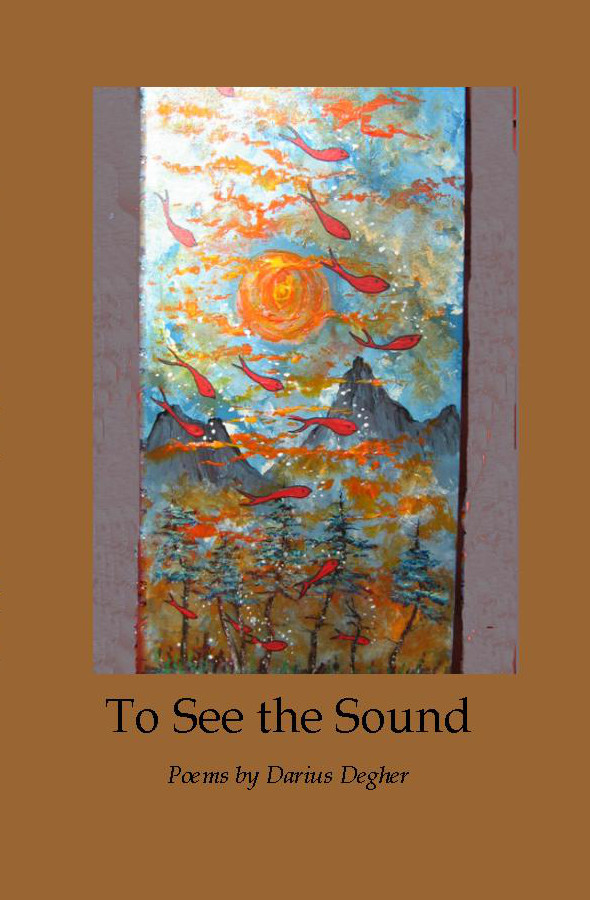 Many of the poems in To See the Sound explore notions of perspective, the shifting ways we see the world, the interplay of our ideals and senses as we negotiate our lives--and our deaths. Many also wrestle with constructions of ethnic and national identity, the speakers as heritage tourists, their own identities becoming increasingly intangible and remote. The collection is an example of postmodern formalism, in which historical forms like the villanelle and sonnet are simultaneously revered and deconstructed. Here, conservatism is not the driver of the formalism. Instead, the engine seems to be Degher's awareness of poetry's historical nexus to song, his commitment to maintaining aural and oral foundations, to keeping music in the poem.

"There is deep wisdom and joy to be found in Darius Degher's latest collection, To See the Sound. In poems that balance elegant, well-crafted lines with the bite of a contemporary and original voice, Degher stuns the reader poem after poem with a formalism that, as the speaker hopes for in 'In the City Lights Bookstore,' is 'holy and uncarved.' Perhaps most striking is the poet's deft examination of elusive issues such as time and mutability. For instance, in 'Fiftieth Summer,' the speaker desires to 'make something that doubles and evolves / to do something that makes its meaning mean,' and that is exactly what this collection does, speaking to the deep life of the individual and change we both fear and need. I cannot recommend this book highly enough." -- Rob Griffith

"The poems in Darius Degher's wonderful book To See the Sound do justice to a range of surprising subjects: invasive species, the orange's place in world history, a newspaper's report that Mohammed has become the most common name of newborn boys born in Malmo, Sweden. Sensuous, playful, and expertly crafted, this collection achieves that rare balance between intelligence and heart, presenting, in the poet's own words, 'pellucid divinity in corporeal clothes.'" -- April Lindner

"Darius Degher's poems adroitly work between the old and the new. Here we have the ancient magic of metaphor-making combined with a richly musical handling of traditional meter. However, Degher's ear and eye are tuned to the imagery, speech, and problems of now, and he understands the poet's call to speak to his age and does so with great sensitivity and precision. It is to his credit that Google Earth and Facebook exist alongside Eden and 'strata of stories / layer / on layer' as he probes history, science, family, and the work of poetry itself to see what this world sounds like. This is a unique voice and an impressive collection. See it and hear it and rejoice." -- Paul Bone

"Though many of the poems in To See the Sound are based on personal experience, there is nothing self-regarding in Darius Degher's work. Here is a poet alive to the richness of the contemporary world and the ironies of his place within it. Evocative, earthy and humane, these personal narratives form bright eddies in the flow of historical time--a movement that his work both recognises and resists, insisting on the living moment and its sense of connection. This is an eclectic and wise collection, revealing a fluid and subtle sense of form built from the cross-rhythms of language and meaning." -- Graham Mort

"In these pages, Degher imagines his last request: 'hammer me a craft.' Indeed, the poems here are wrought with an artisan's careful attention, a historian's insight, and the wisdom of a seasoned traveler. With true measure, these poems soar toward a clear horizon." -- Chryss Yost

"Darius Degher's vivid and echoing poetry is born out of an impressive fusion of curiosity and compassion. With an explorer's instinct his poems map that borderline region between the material and immaterial worlds, from which he writes back with the kind of taut, intelligent lyricism and resonance which only comes from true poetic attention." -- Jane Draycott

Darius Deghers poems have appeared in magazines and journals on both sides of the Atlantic, including Measure, Smiths Knoll, Agenda, Nth Position, The Red Wheelbarrow, Italian-Americana (at the University of Rhode Island), Other Poetry, Equinox, and Poetry Salzburg Review. To See the Sound is his first collection. He teaches writing and literature at Malmö University, Sweden, where he lived for many years. He is the editor of the Shipwrights Review, "the magazine of decentered English," an online literary magazine for second-language-English authors (www.shipwrightsreview.com). He has a B.A. in literature (cum laude) from the University of California, Los Angeles and an M.A. in creative writing (with distinction) from Lancaster University in England. Darius is also a songwriter and musical artist, who has released five albums and performed on numerous stages in the United States and Europe. He lives in North San Diego County with his wife and two daughters. Visit www.dariusdegher.com.