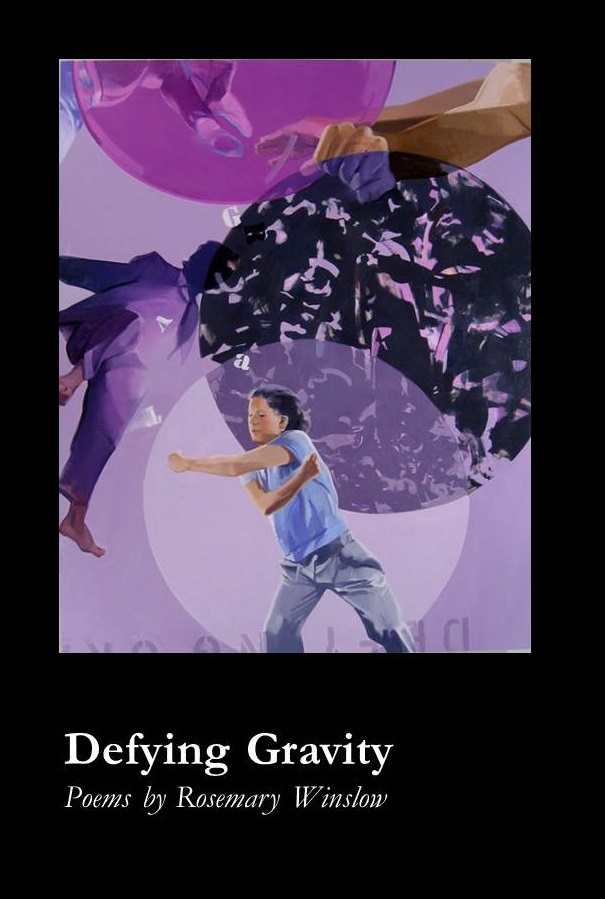 Rosemary Winslow's new poems in Defying Gravity search out our shared life wrestling with pain and suffering to clear a way to lift us up in our common ground. Wielding the resources of both formal and free verse, she affirms a natural growth of experience breaking through and upward: she writes, "Let it be, then." "We are born in pain, we go round and round, we bud, open, drop/ like mercies for each other."

"At a moment when truth isn't trendy, Rosemary Winslow valiantly flies hers: 'We have our loves and our wars.' Hers is an 'art of remembrance,' ranging through time and space, celebrating and mourning, in sonnet, haiku, ghazal, cento, elegy, ekphrasis, keeping company with Dante, Basho, Whitman, Dickinson, Frost, Eliot. Sometimes she speaks intimately to those nearest her-husband, daughter, mother, father soldiering through World War II-and sometimes to those far away, in Soweto, Darfur, Somalia, Srebrenica, Baghdad, Chechnya. Near or far, those she addresses, in sonorous soundings, have her full, compassionate attention." -Stephen Cushman

"Defying Gravity reveals the fissures in our imperfect world. It could break into pieces were it not for the pressure of opposing forces. Here is the earthly-the lover's body hot and naked, his face 'moored in night's pocket.' And here is the metaphysical-the soul greeting the 'wild calm' that is you. Here is the garden, ripe with daffodils and magnolia. And here is brutality, with harrowing images from Soweto, Somalia, Kosovo. These poems travel the full spectrum of human experience, sacred and profane. We are stronger for them." -Barbara Goldberg

"Rosemary Winslow's poems partake deeply of the openness that is poetry's hallmark, the permeability of feeling that moves through doors, eras, photos, love affairs, glances in the street, hydrangeas, and wars and will not be deterred. There is courage in this and delight and gratitude and longing. There is also the willingness to stand up and be counted, to be present in the ways that our great American forebears, Whitman and Dickinson, stood up. Her poems have that savor of being devoutly present, unafraid of the random holiness and contested grief."-Baron Wormser

Rosemary Winslow is a professor at The Catholic University of America, where she has developed and directed writing programs, teaches literature and poetry writing, and publishes poetry and criticism. Her awards include numerous grants and three Larry Neal Prizes for Poetry.  She lives with her husband, John R. Winslow, an artist, splitting their time between Washington, D.C., and New Hampshire.